Grafana Tempo lets you scale tracing as far as possible with minimal operational cost and less complexity than ever before.

The easiest way to get started is with Grafana Cloud, our fully composable observability stack.

Grafana Tempo is an open source, easy-to-use, and high-scale distributed tracing backend. Tempo is cost-efficient, requiring only object storage to operate, and is deeply integrated with Grafana, Prometheus, and Loki. Tempo can ingest common open source tracing protocols, including Jaeger, Zipkin, and OpenTelemetry.

The Tempo project was started at Grafana Labs and announced at Grafana ObservabilityCON in October 2020. It became generally available with the 1.0 release in June 2021. Tempo is released under the AGPLv3 license.

Grafana Labs is proud to lead the development of the Tempo project, building first-class support for Tempo into Grafana, and ensuring Grafana Labs customers receive Tempo support and features they need.

Sample 100% of our read path
The Problem

How does Grafana Tempo work? 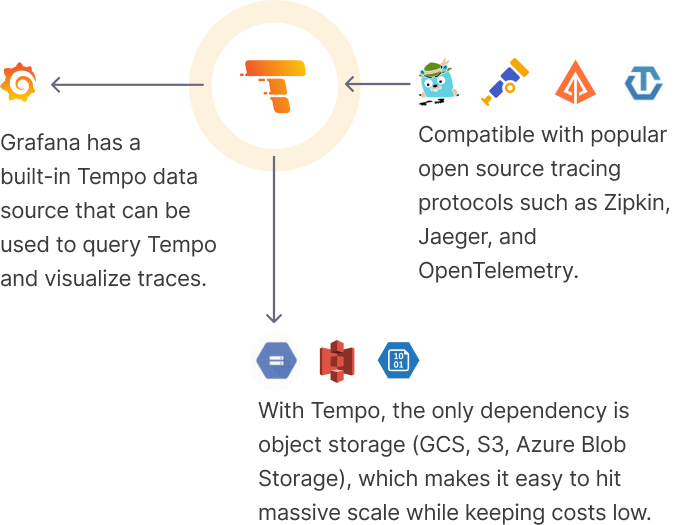 Built on open source, driven by the community

Use the demo app

Grafana Labs is proud to lead the development of the Tempo project. And we’re hiring!

Choose the version that works best for you

To use Grafana Traces, you have three options:

Install, administer, and maintain your own instance.

Managed and administered by Grafana Labs with free and paid options for individuals, teams, and large enterprises.

Get up to 50GB of traces at no cost in the free tier of Grafana Cloud.

A self-managed option for organizations that have special requirements around data localization and privacy.

Getting started with tracing and Grafana Tempo

In this webinar, we'll show you how to get started setting up Grafana Tempo, our open source, easy-to-use and high-volume distributed tracing...

In this ObservabilityCON session, find out the latest features in the open source tracing project and the new addition to Grafana Enterprise...

Join our webinar where we’ll cover how one can identify an issue and be able to quickly resolve it simply by using metrics, logs, and traces...