This repository defines a Grafana data source plug-in for the openHistorian.

The openHistorian is a back office system developed by the GridProtectionAlliance that is designed to efficiently integrate and archive process control data, e.g., SCADA, synchrophasor, digital fault recorder, or any other time-series data used to support process operations.

The openHistorian is optimized to store and retrieve large volumes of time-series data quickly and efficiently, including high-resolution sub-second information that is measured very rapidly, e.g., many thousands of times per second.

Building a metric query using the openHistorian Grafana data source begins with the selection of a query type, one of: Element List, Filter Expression or Text Editor. The Element List and Filter Expression types are query builder screens that assist with the selection of the desired series. The Text Editor screen allows for manual entry of a query expression that will select the desired series.

The Element List query builder is used to directly select the series to trend. New elements can be selected and searched by clicking the + button at the end of the ELEMENTS row. Typing text into the drop-down box will start filtering the available data points for selection.

The Filter Expression query builder is used to define an expression (see filter expression syntax) to select the series to trend. Complex expressions can be created that will dynamically query data series. Query results will mutate as the availability of the source point data changes, i.e., series derived from the query result will change as data points are added or removed in the openHistorian. 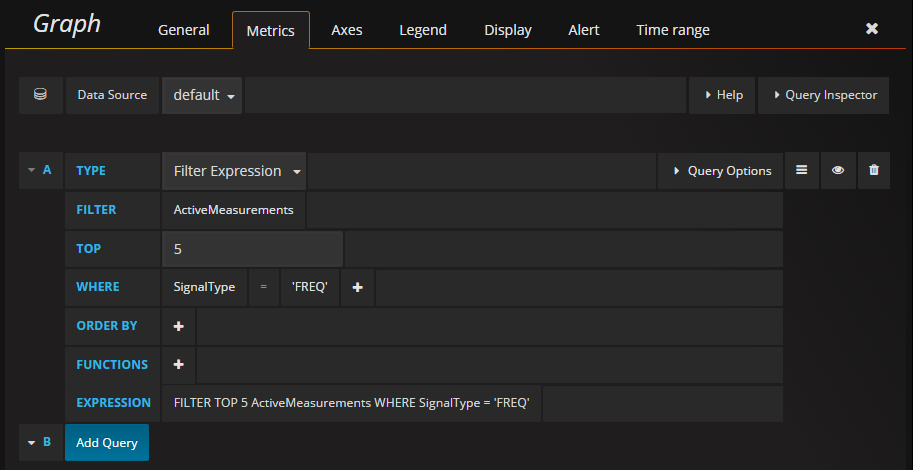 The Text Editor query builder is used to manually specify a text based query expression for openHistorian Grafana data source metrics. The expression can be any combination of directly specified point tag names, Guid identifiers or measurement keys separated by semi-colons - or - a filter expression that will select several series at once.

Metric queries using the Text Editor can also be specified as filter expressions that use a syntax that is similar to SQL. For example, the following expression would select the first 5 encountered series for any device with a name that starts with SHELBY:

When using the Text Editor to build a query, both filter expressions and directly specified tags, with or without series functions, may be selected simultaneously when separated with semi-colons, for example:

Complex combined expressions that contain both directly specified point tags and filter expressions are only available when using the Text Editor query builder.

The openHistorian Grafana data source includes various aggregation and operational functions, e.g., Average or StandardDeviation, which can be applied on a per-series and per-group basis. Functions applied to the group of available series can operate either on the entire set, end-to-end, or by time-slice. See GSF Grafana Functions for more detail and the full list of available functions.

The Element List and Filter Expression query builder screens define the available functions as pick lists that get applied over the selected series by clicking the + button at the end of the FUNCTIONS row:

Many series functions have parameters that are required or optional – optional parameter values will always define a default state. Parameter values must be a constant value or, where applicable, a named target available from the expression. Named targets are intended to work with group operations, i.e., Set or Slice, since group operations provide access to multiple series values from within a single series. The actual value used for a named target parameter will be the first encountered value for the target series – in the case of Slice group operations, this will be the first value encountered in each time-slice. Named target parameters can optionally specify multiple fall-back series and one final default constant value each separated by a semi-colon to use when the named target series is not available, e.g.: SliceSubtract(1, T1;T2;5.5, T1;T2;T3)

Supported alarm annotation queries include #ClearedAlarms and #RaisedAlarms, which will return all alarms for the queried time period:

All annotation queries are internally executed using the Interval function with a time parameter of zero to request non-decimated, full resolution data from the data source to make sure no alarm values are skipped for the specified query range. Although this operation produces the most accurate query results, its use increases query burden on the data source – as a result, queries for long time ranges using alarm annotations could affect overall dashboard performance.

Starting with openHistorian 2.4, Grafana can be seamlessly integrated with the openHistorian such that the openHistorian primary web site can act as a reverse proxy to an instance of Grafana accessible from: http://localhost:8180/grafana/. Deployments of the openHistorian with hosted Grafana integration include pre-configured data sources for the primary data and statistics archives named OHDATA and OHSTAT respectively.

For archived time-series data, the Grafana web service is hosted within the existing MVC based web server architecture and is just “on” with nothing extra to configure. To use the interface, simply register a new openHistorian Grafana data source using the path /api/grafana/ from the existing web based user interface URL, typically: http://localhost:8180/api/grafana/ *.

The typical HTTP setting for Access in any instance of the openHistorian Grafana data source is proxy. However, when referencing a hosted Grafana instance that is integrated with the openHistorian 2.0 via reverse proxy, the Access setting can be set to direct such that the user's authentication headers can flow back through the openHistorian for user security validation: 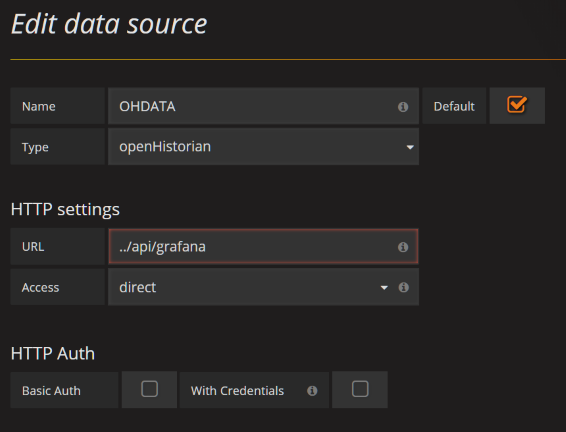 The openHistorian 2.0 also includes a pre-configured local statistics archive that can be accessed using an instance of the openHistorian Grafana data source with the following URL: http://localhost:6356/api/grafana/ * – note that the trailing slash is relevant.

Statistical information is archived every ten seconds for a variety of data source and system parameters measured for the openHistorian 2.0 service.

Recent versions of the following Time-series Library (TSL) applications now include support for Grafana. To use the Grafana interface with an existing openHistorian 1.0 archive, simply register a new openHistorian Grafana data source using the appropriate interface URL as defined below * – note that the trailing slashes are relevant:

If the assembly GrafanaAdapters.dll is deployed with an existing Time-series Library based project, e.g., Project Alpha, the 1.0 openHistorian Grafana interfaces will be available per configured openHistorian instance. For Grafana support, the time-series project needs to use Grid Solutions Framework dependencies for version 2.1.332 or beyond — or to be built with Project Alpha starting from version 0.1.159.

When the GrafanaAdapters.dll is deployed in the time-series project installation folder, a new Grafana data service entry will be added in the local configuration file, e.g., ProjectAlpha.exe.config, for each configured historian when the new DLL is detected and loaded. Each historian web service instance for Grafana will need to be enabled and configured with a unique port:

If the service is deployed on a Windows machine and is configured using the default NT SERVICE account, the service will not have rights to start the web service on a new port and will need to be registered. As an example, the following command can be used to register a new Grafana web service end-point on port 6357 for the ProjectAlpha service:

The netsh command must be run with administrative privileges. The + host designation is used to bind to the URL and port to all local interfaces; otherwise, a specific IP must be provided.

* Replace localhost as needed with the IP or DNS name of system hosting the archive.

All time-series data stored in the openHistorian includes measurement state flags that describe the data quality state of an archived value. The openHistorian Grafana data source includes the ability to filter queried data to the desired data quality states by excluding specified data flags. Default excluded data flag filters can by defined at a data source level and overridden at an individual metric query level. To change the default flags for an individual metric query, click the Query Options button near the end of the query TYPE row: 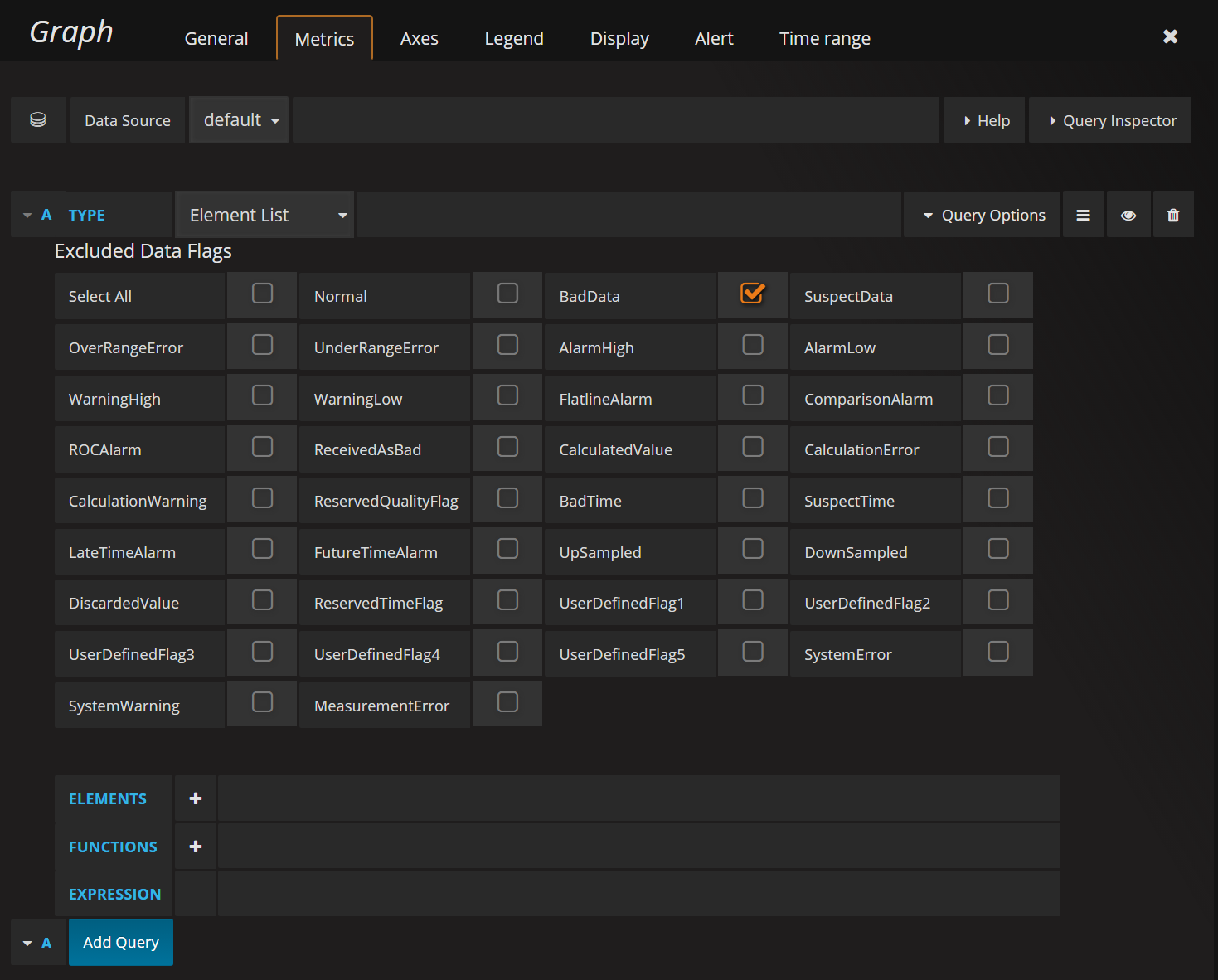 For installation within a stand-alone instance of Grafana, see the offical instructions for steps to install the openHistorian Grafana data source using the Grafana CLI tool. Note that Grafana 3.0 or better is required to enable plug-in support.

Alternately the openHistorian Grafana data source can be installed into a Grafana instance by cloning this repository directly into the Grafana plug-ins directory, i.e., data/plugins/. After cloning, restart the grafana-server and the plug-in should be automatically detected and be available for use, e.g.: