This topic includes the release notes for Grafana v7.5. For all details, read the full CHANGELOG.md.

These features are included in the Grafana open source edition.

Grafana 7.5 comes with alerting support for Loki. With LogQL you can wrap a log query with the functions that allow for creating metrics out of the logs, such as “rate()”. Metric queries can then be used to calculate things such as the rate of error messages. When combined with log parsers, they can be used to calculate metrics from a value within the log line, such latency or request size.

With alerting support for Loki, you can now create alerts on Loki metrics queries.

Alerting was updated as a result of this change. 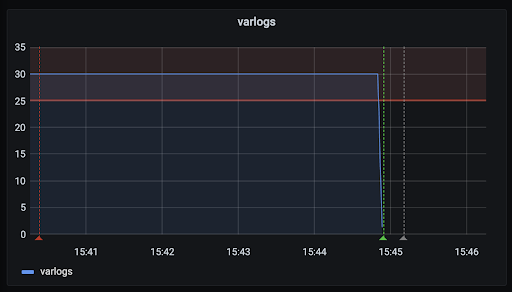 A new Loki logs browser lets you construct the queries step by step: you choose labels that you like to consider, such as “job”, then you select the values that you like, such as “my-app1”. Note that you can select values from more than one label, and that they get facetted. This means only possible label combinations are selectable. When you’re done, you can run the query either as a logs or a metrics query (a metrics query returns the log volume in a chart).

For new Prometheus data sources, we have changed the default HTTP method to POST. POST allows for much larger query bodies than using the GET method. This is necessary when sending queries from graphs with a lot of targets, for example, many hosts in a dashboard variable. The POST method also makes the Query Inspector data easier to read since the query is in plain text whereas the GET query is URL encoded.

Prometheus data source was updated as a result of this change.

When searching for text in Elasticsearch logs, matching words in the log line returned by the query are now highlighted. 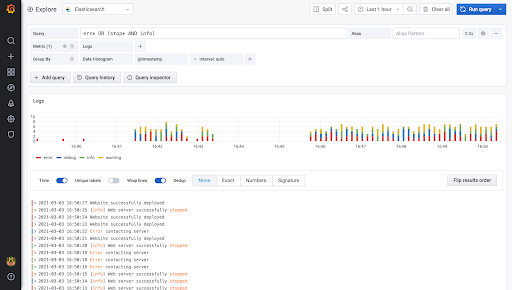 In Grafana 7.5, we changed how data for the trace view is sent from the data source. The required data frame has a clear format, which is more aligned with how data is generally represented in Grafana. This makes it easier for third-party developers to implement data sources leveraging the trace view.

Instead of the file path, users can now paste the SSL certification content in the UI. This allows them to configure the certification even when they do not have access to the server.

Note: It remains as limitation for the Grafana Cloud, as users may not have access to the server configuration.

Postgres data source and Provisioning were updated as a result of this change.

Grafana 7.5 includes a deprecation notice for these queries, and some documentation to help users prepare for the upcoming changes.

In previous versions, when querying metrics for Service Level Objectives (SLOs) in the CloudMonitoring data source, only the first 100 services were listed in the Service field list. To overcome this issue, the API limit for listing services has been increased to 1000.

Tempo as a backend data source

We have converted Tempo to a backend data source and dropped support for tempo-query’s (Jaeger) response. To configure it, you can now point to the port that is set in the Tempo configuration file.

Azure Monitor data source was updated as a result of this change.

These features are included in the Grafana Enterprise edition.

When caching is enabled, Grafana temporarily stores the results of data source queries. When you or another user submit the same query again, the results return from the cache instead of from the data source (such as Splunk or ServiceNow).

Use template variable in reports

If you have created dashboards with template variables, then you can choose which values are selected when rendering a report. This makes it easier to tailor reports to their audience or generate multiple reports from the same dashboard.

Enable this feature in configuration settings using the templateVariables flag.

For more information, refer to Reporting.

If a Grafana instance has exceeded its licensed number of active users, then non-active users who try to sign in to Grafana will be prevented from doing so. Active users are users who have logged in to Grafana in the past 30 days. The total number of users registered in Grafana does not affect this rule. This enforcement is applied separately for Viewers and for Editor/Admins, so if you reach your active Viewer limit, new Editor/Admins will still be able to sign in. This rule also includes a 10% buffer, meaning that you need to exceed your limit by 10% before users are prevented from signing in.

Here is an example:

All of the Viewers who have signed in over the past 30 days will retain the ability to sign in.

If you try to sign in to a fourth device or browser, then you will be prevented from doing so; the limit of concurrent sessions is three.

If you sign in to a fourth device or browser, then you will be signed out of the session that is least current. Concurrent session limits Each Grafana Enterprise user will be limited to three concurrent user sessions. When a user opens a fourth session, then the longest-inactive session will be automatically signed out.

A new session is created when you sign in to Grafana from a different device or a different browser. Multiple windows and tabs in the same browser are all part of the same session, so having many Grafana tabs open will not cause any issues.

For more information on Grafana Enterprise licensing and restrictions, refer to License restrictions.

There are no known breaking changes in this release.

Sets the maximum time using a duration format (5s/5m/5ms) before timing out read of an incoming request and closing idle connections. 0 means there is no timeout for reading the request.