Grafana Labs at 5: How We Got Here and Where We’re Going

In the beginning, there was a developer using Graphite, and he found its user interface lacking.

Then he discovered the Kibana project, liked its UI, and forked it. Grafana was born in 2013. “I started Grafana to do something similar as Kibana, but focused on time series metrics. My goal was to make time series data accessible for a wider audience, to make it easier to build dashboards, to make graphs and dashboards more interactive,” says Torkel Ödegaard.

What started as a personal project soon went viral. “It’s such a visual and appealing way to present data, and you can get at-a-glance insight from it,” he says. “Once a couple of people within a company start using it, they put the dashboards up on a TV or big screen, and people who walk by become intrigued by it.”

Raj Dutt and Anthony Woods were definitely intrigued. The two had worked together at a company that was recently acquired, and were looking for a new opportunity. “We were really excited about the changes that were going on with monitoring, and were kind of enamored of the Grafana project even before we met Torkel,” says Dutt.

When Torkel Met Raj and Anthony

In 2014, they reached out to Ödegaard and asked him to come to New York City for a weeklong consulting gig. “We just got along so well,” says Woods. Adds Dutt: “One thing led to another, and we decided to start a company around Grafana.”

Ödegaard had just left a consulting gig in order to work on the Grafana project full-time, and was thinking about how to make the project sustainable. “It was definitely good timing,” says Woods.

Grafana Labs (originally raintank) – with Dutt as CEO, Woods as CTO, and Ödegaard as CGO – was thus created, dedicated to accelerating the adoption of the open source software as well as building a sustainable business around it.

For Dutt and Woods, the fact that Grafana was open source was critical. “A lot of times, open source projects are acquired or strategically merged and basically the acquiring company closes it off or makes it a more proprietary thing,” says Dutt. “One of the fundamental tenets of Grafana Labs is we believe open source is a better way.” Adds Woods: “We want to provide quality open source software for the community to leverage and use. That’s part of our core strategy.”

Grafana v.2.0 was released by the newly-formed Grafana Labs in the summer of 2015. “New startups and established enterprise companies alike depend on Grafana, and we’re always impressed by the huge variety of use cases people find for it,” says Ödegaard. Organizations and individuals were using it for scientific purposes, for industrial and agricultural sensors, and for energy management. One user even created a dashboard to show the wait times at hospital emergency rooms in Japan.

This wide variety of use cases aligns with one of the company’s early tenets: Democratize metrics. “It means making software easy to use, but it also means owning your data, and bringing data from wherever you need to,” says Dutt. “We really think that this stuff shouldn’t be left to the data scientists or the developers. If you’re in the marketing department and you understand what your metrics are, and how they’re related, you should be able to create an awesome visualization for your team. When Grafana becomes easier to use, it empowers people to leverage their data to innovate more quickly.”

Grafana dashboards became so recognizable, in fact, that during the first Falcon 9 rocket launch in 2016, they were easy to spot, displayed on a screen at Space X’s control center. “I couldn’t believe it at first,” says Ödegaard. “But zoom in and you can see it.”

And then a few weeks later, he adds, “there was a promotional video from Microsoft showing off their underwater data centers. And there were a couple of people standing around pointing at a Grafana dashboard.”

“When you look at the monitoring landscape, you’ve got all the open source players, and on the commercial side you’ve got all these new SaaS players,” says Dutt. “We think there’s a third choice, which offers the convenience of SaaS – you sign up, and if you pay your bill, it just works for however much data you send it – with the flexibility of open source. All our software is open source so there’s no lock-in. You own your own data. You can combine other data sources with the platform. It’s the best of both open source and SaaS. We call it Open SaaS.”

Specifically, Grafana Cloud solves a challenge that many users have with storing all their metrics: volume. “Five years ago, people would measure every 5 minutes; now people want it every 10 seconds,” says Woods. “People used to measure maybe a handful of metrics per server; now people are collecting hundreds of different metrics per server. Also, with cloud computing there’s a lot of dynamic infrastructure – virtual machines come and go all the time. We provide a hosted metrics platform, and people can send us the metrics and we handle the rest. It integrates directly with Grafana, which people are familiar with and has a great user experience. So we solve the complexity of scaling the infrastructure.”

On the open source side, new features were introduced at a rapid pace, and much work was put into user experience.

The plugin system was added in v3 in 2016. “We have an ever-expanding catalog on Grafana.com of integrations and dashboards that, whatever you’re doing – whether you’re monitoring MySQL or MongoDB or a Linux server or your home thermometer – there are easy ways to get started and get data into our platform,” says Dutt. “There’s a tremendous opportunity just going wide with that in terms of plugging into the ecosystem.”

The Growth of the Team

Over the years, Grafana Labs has expanded from the three cofounders to 88 post-geographical staffers in 19 countries, most working remotely. Dutt, Woods, and Ödegaard themselves are located on three different continents.

Five years in, Dutt believes the company has made good on its founding mission. “No one else was making open source observability mission critical and delivering a service,” he says. “Now all the cutting edge stuff is happening in open source. That’s what customers want, and we’ve become a trusted advisor to deliver it as a service. So it seemed like a clean, good fit and an educated bet that open source observability was no longer the cheap and cheerful alternative to the ‘real stuff.’ It is the real stuff.”

Indeed, Grafana has recently crossed 400,000 active instances. “Given where we are now, we’ve certainly come a really long way,” says Dutt. “We’ve got an incredible team. Over time it became increasingly obvious that we had a terrific opportunity, particularly with what we built and the adoption that we’ve gotten.”

Of course, “if you’d asked us in 2014 whether we predicted that we’d get to this point by now, we would’ve probably said yes,” Dutt says, adding with a laugh, “but we probably wouldn’t have believed it.”

And they’ve managed to get this far while holding on to certain characteristics that Grafana Labs was built on: remote-first, transparent, open. Still, as the company’s growth has accelerated, some things are changing. For one thing, the Manhattan office is feeling a bit cramped. “It’s a new world order,” Dutt says. “Everyone’s going to be challenged to get out of their comfort zone and evolve faster.”

As Grafana Labs enters its next chapter, Dutt says, “on the list of things we care about most, sustainability and adoption are up there. But the number one thing is creating this awesome work environment where open source projects and developers come together to create awesome projects that gain mindshare and actually provide value.” 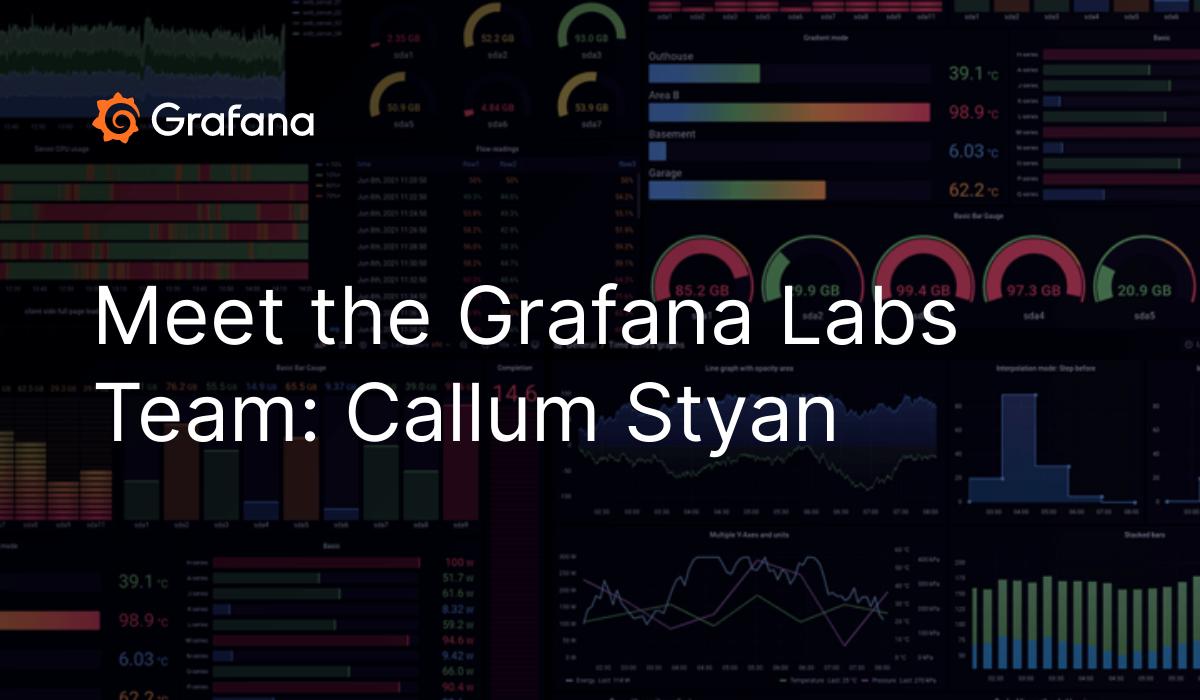 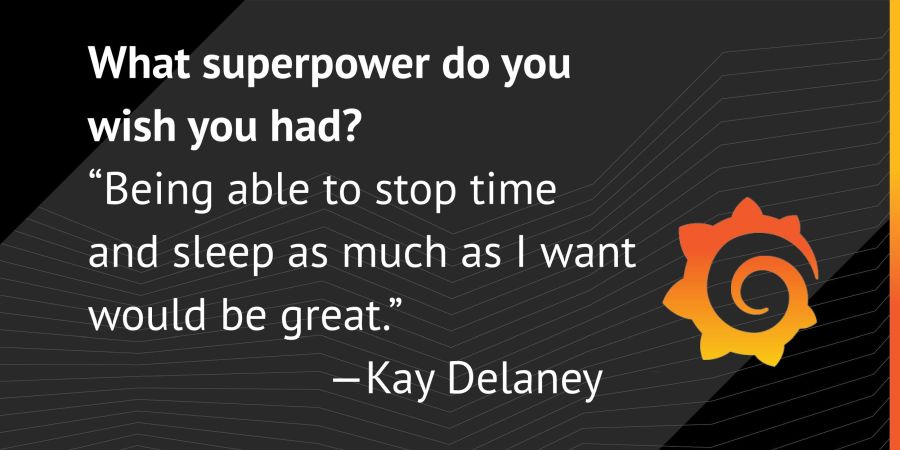