The Internet of Things has transformed people’s lives, enabling everything from “smart homes” to remote health monitoring. And now a startup called AMMP Technologies is using IoT – and Grafana – to help bring electricity to rural Africa.

Hendrik Broering, COO and cofounder of AMMP, told the audience at GrafanaCon L.A. about a village in Tanzania called Changombe, with a population of about 2,000 and no access to electricity until 2017.

That year, a developer called Rafiki Power built a solar mini-grid and provided distribution grids to households and businesses in the village – 351 connections in all.

The impact was huge: “You increase the standard of living and give people in the village opportunities that they didn’t have before,” Broering said. “People were now able to run laundry services in those villages. They were able to store cold drinks and food, but also things like vaccinations. The could extend their businesses by having electrical appliances for a hairdresser shop, for example.”

The economic activity in the village also got a boost from electrification because “equipment like welders or drillers and even corn grinders were able to operate,” he added.

And all of this was enabled by solar mini-grids, which generally consist of a centralized power house that has solar panels on top; containers that store all the power electronics for the village as well as batteries for the night; a 230-volt, 50-hertz electricity grid that goes to the individual households and businesses; and smart meters installed in households to measure voltage and energy consumption, as well as provide a means for payment for electricity consumption.

The Importance of Monitoring Data

Technical data needs to be monitored on both the consumer side, at the smart meters, and on the production side, on the battery and PV inverters at the power electronics sites. “What most people don’t know is that most of those villages actually have a pretty good mobile data connectivity,” said Broering, “so it is actually possible to access this kind of data.”

Broering’s company monitors more than 100 of these solar mini-grids across multiple countries in Africa. “We use the operational data to help developers of those kinds of mini-grids improve many activities across the whole value chain for those developers,” he said.

Data can help prove that the providers delivered what was promised, making the projects more bankable. It can be used for benchmarking systems and technologies against each other to improve system design and engineering.

“But maybe most importantly,” he said, “the technical maintenance and the operations of those kinds of systems are usually very complex.”

AMMP typically installs a local gateway at those systems that enables communication with each of the individual devices and sends the data in the cloud or through a direct API connection to the equipment vendors. All of the data is stored in an Influx database, and AMMP applies some analytics and alerting on it with Kapacitor and Loud ML. Then all of it is visualized on Grafana.

This visualization is important because “those villages are really remote and whatever can be done to not go out there and try to fix things yourself is extremely valuable,” Broering said. “A former colleague of ours who was trying to reach one of the villages in Tanzania got stuck in the mud, and that was just a short rain in Tanzania. In the long rains it’s even worse.”

One use case for Grafana is measuring smart meter voltages. 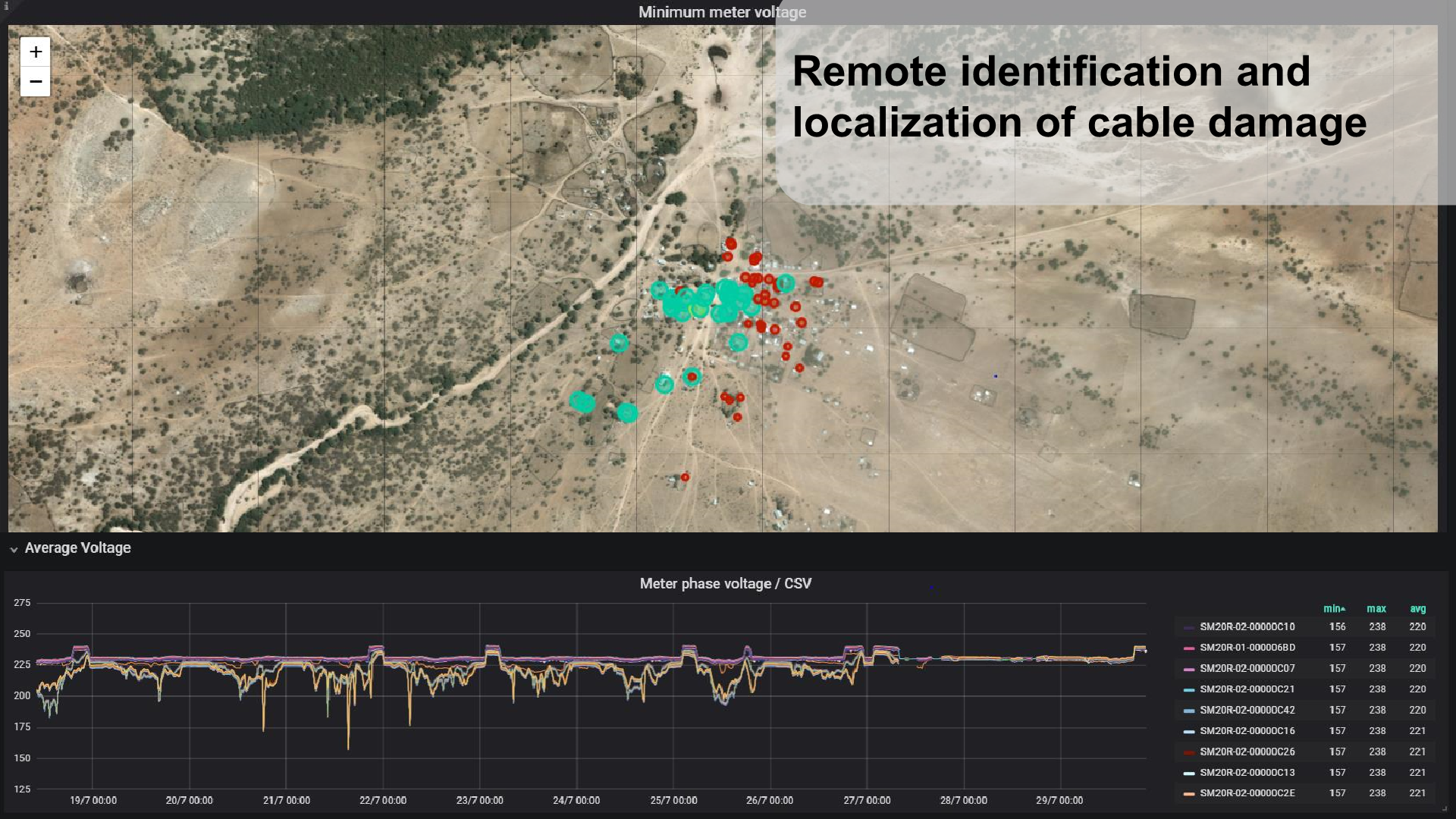 “Each of the points is an individual household, and the color represents the voltage at this point,” he explained. “A certain part of the grid had some kind of voltage drop, and the other parts didn’t. And if you know how you build your electricity grid and your grid typology, it’s quite straightforward for you to identify remotely where this problem is.”

In this case, it was a cable issue, which could be localized remotely. On site, “you go to the place where you localized it, you dig out the cable, and then in this particular case you find that the cable actually was damaged, so you fix the cable,” he said. 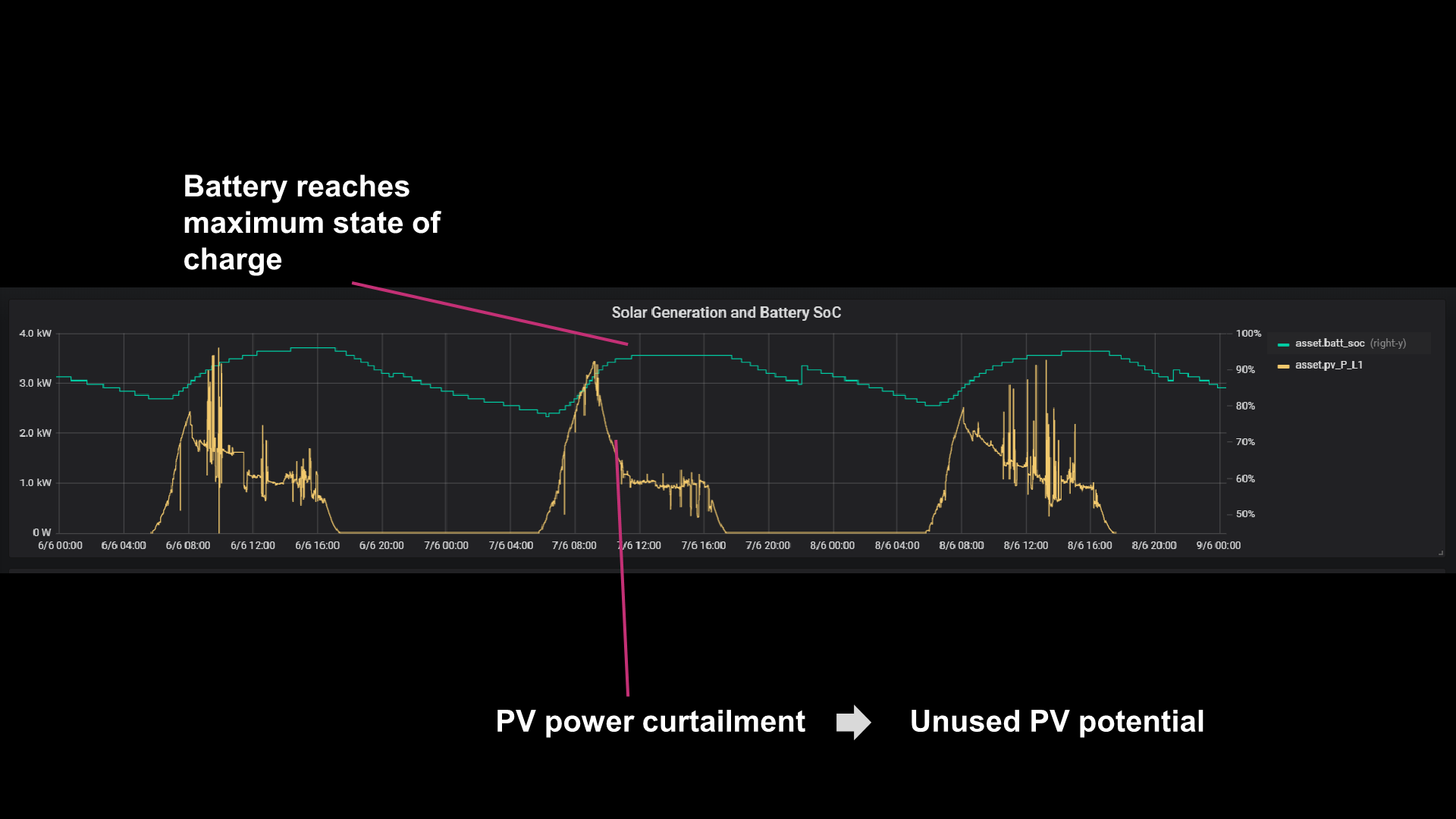 In this case, there was a new water pumping project commissioned for the village. The 10,000-liter water tank needed to be filled with an electric pump, and the solar project happened to have excess solar energy. “So why don’t we come up with a solution that would then make sure that the tank has just been filled with this excess energy?” he said. 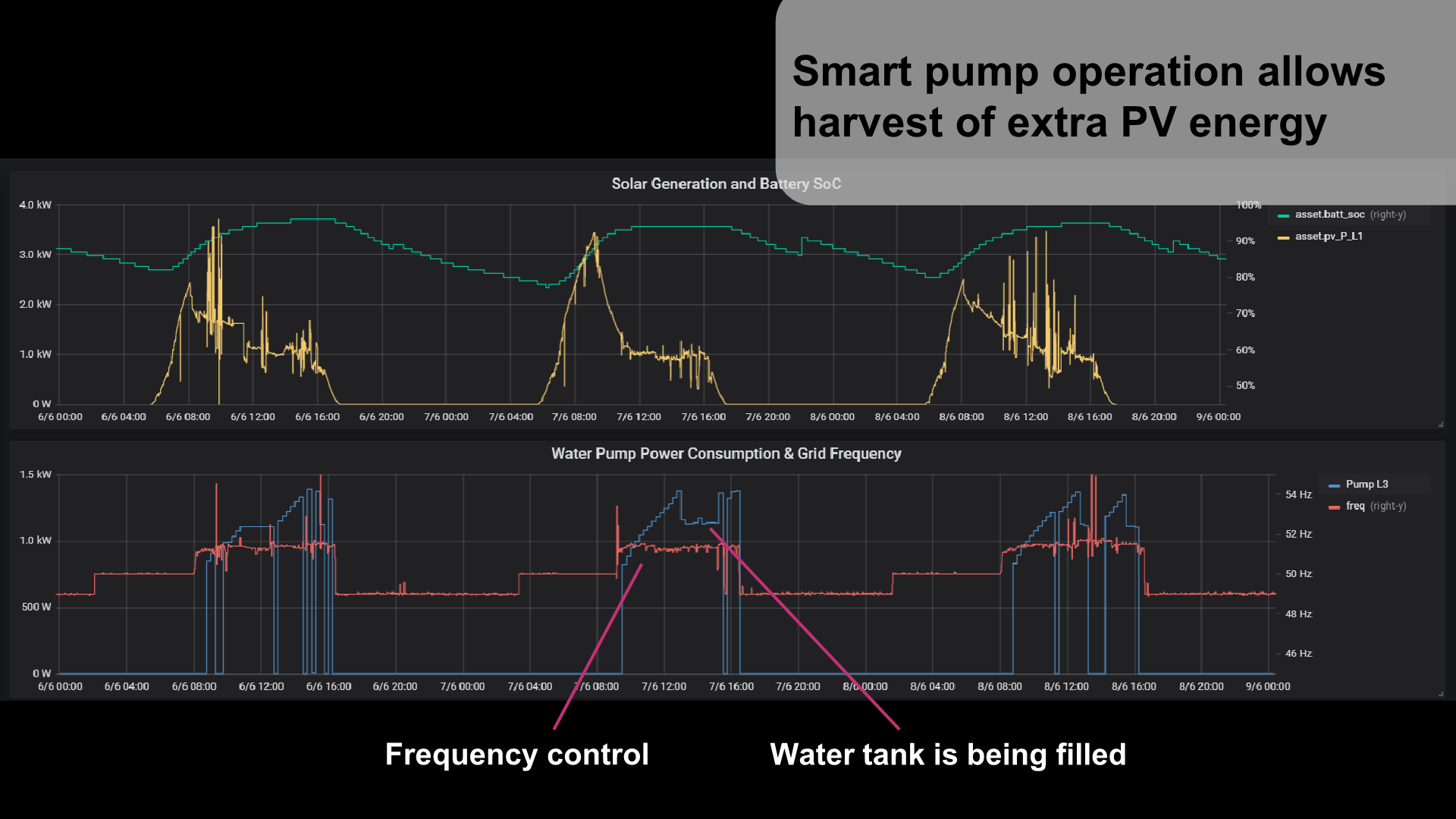 “At the end of the day, this led to lots of happy faces and a very successful water pump operation in this village,” said Broering.

Where we left off: AWS had taken the Elasticsearch software and launched their own cloud offering in...