This fall has been busy, exciting and at times just plain crazy at raintank. We’ve been campaigning on both sides of the Atlantic, spreading the democratize metrics message.

The whirlwind kicked off at Velocity East, NYC on Oct 12.

Litmus is our first OpenSaaS app for Grafana. If you care about your global performance and availability, you should check it out. A preview was announced at Monitorama in June, and we’ve boarded hundreds of early access users since then.

We thought Litmus might be interesting to the Velocity crowd, and we were right. Not only did we find more Grafana users than we expected, but the idea of bringing turnkey network performance data (to start) really resonated with them. Plus, Litmus is a low friction way to get awesomely useful Grafana Dashboards. 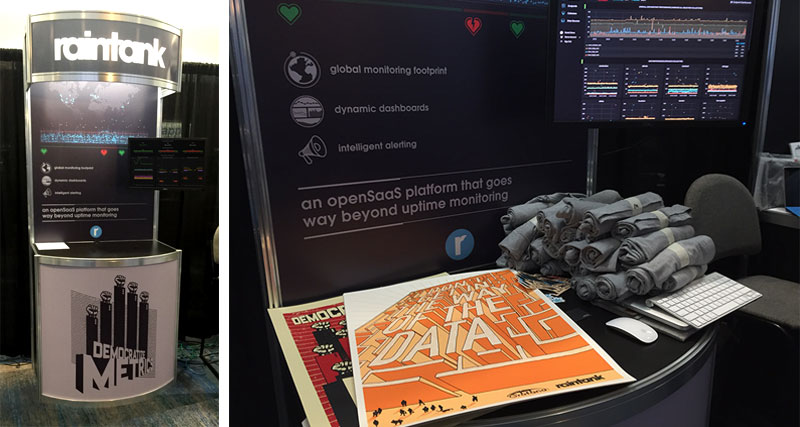 After 3 days of Velocity, we were all exhausted, but the tour kept going; afterall, we were hosting our very own conference in NYC the next day. 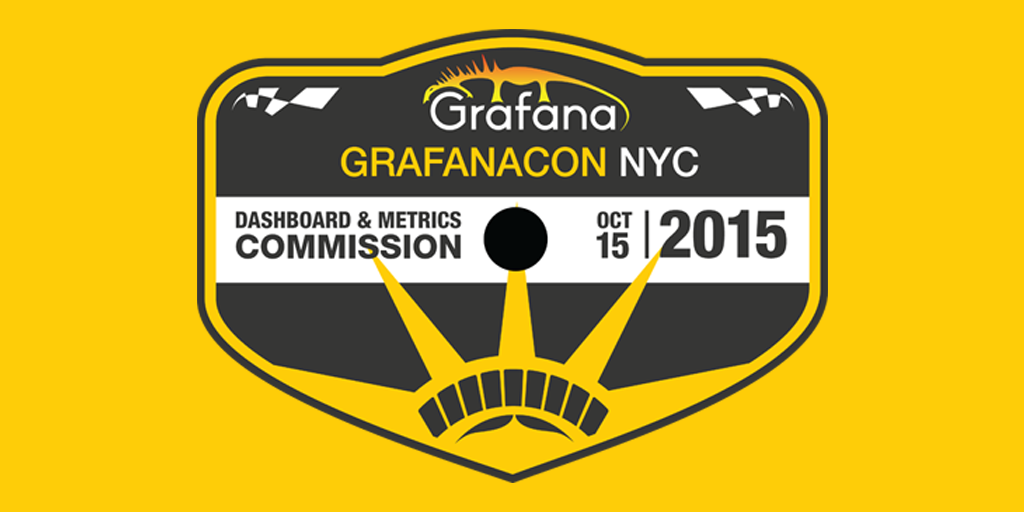 On October 15 we held our first ever GrafanaCon where over 100 people (it sold out quick!) enjoyed an evening of metrics, visualizations and Grafana. It was the first conference raintank has ever hosted as a company. For a bunch of software guys, we’re pretty proud with how it turned out. 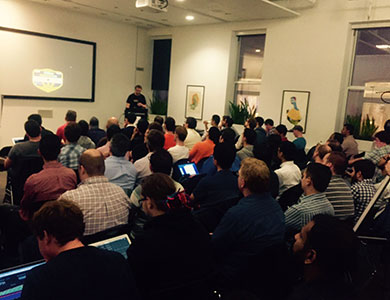 Torkel kicks off the evening, sharing his veiws on democratizing metrics and showing some stats. watch video 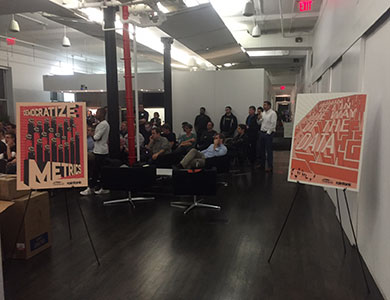 We had some really great talks at the event from companies like Uber and Outbrain, and plenty of questions from the audience. For me, the highlight of the evening was seeing the entire crowd stick around (we were running way late :-) for Torkel’s Future of Grafana presentation. There was genuine excitement around the new Elasticsearch support and mixed-datasource support and flexible, drag-and-drop dashboard panels. 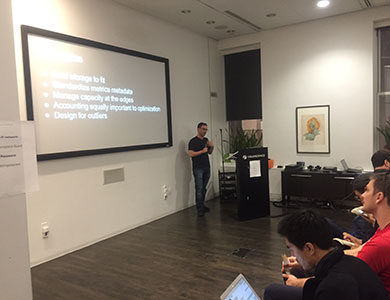 Matt Mihic from Uber on M3 and Metrics at scale. watch video 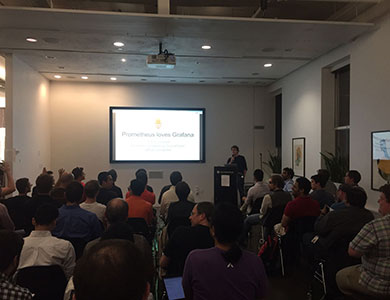 Tobias Schmidt from Soundcloud on Prometheus and Grafana watch video

All of the videos from the conference are now online at the GrafanaCon website.

Not quite able to catch our breaths quite yet, our co-founders Torkel and Anthony quickly flew out to All Things Open in North Carolina. Torkel spoke to a packed room on falling in love with graphs and metrics using Grafana. We also had a swag and demo area where we got to meet many Grafana users, hand out shirts and posters, and show off some new features. 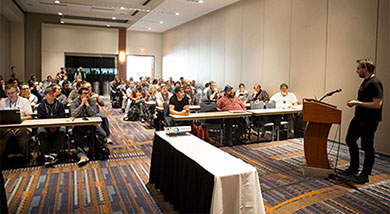 Torkel at ATO 2015 on falling in love with graphs and metrics using Grafana. 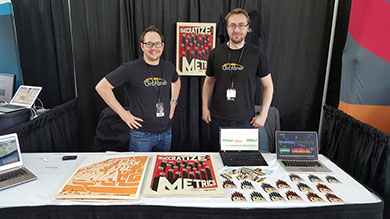 Anthony and Torkel had a great time in North Carolina at ATO.

The raintank posters proved to be more popular than ever, so we had to send them reinforcements via FedEx: 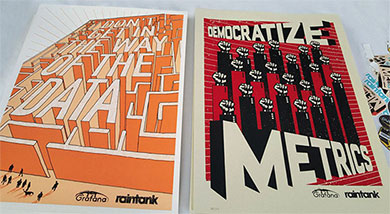 Our poster series was a real hit at All Things Open. Want one? contact us 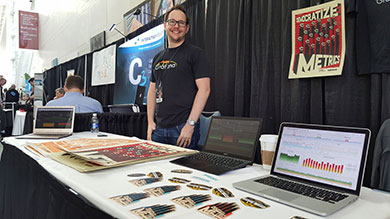 Anthony manning the table, demoing Grafana and passing out swag.

Torkel’s world tour continued to Nuermberg at OSMC. There he gave an introduction to Grafana and examined how we can improve the state of metric visualization. He also spoke about the future of Grafana, including the upcoming alerting engine.

Please place your tray tables in their upright and locked positions.

Overall, it was a productive last few months in terms of getting the message out. It was great to get the whole team together, if only for a couple of weeks.

raintank has resumed its “post geographical” state, with key staff dispersing to Sweden, Australia, and New Zealand. We’re excited to dive back into actually building stuff.

Speaking of stuff, Grafana 2.5 has already been released, and enhancements to Litmus are available in our free early access program. We encourage you to try them out and give us your feedback.

See you at the next Grafanacon!

Photo Credit: hero image by Bill Abbott - Flickr: 757 on down the glideslope

I am not sure who coined the term Democratize metrics first, if it was me or Raintank CEO Raj Dutt.... 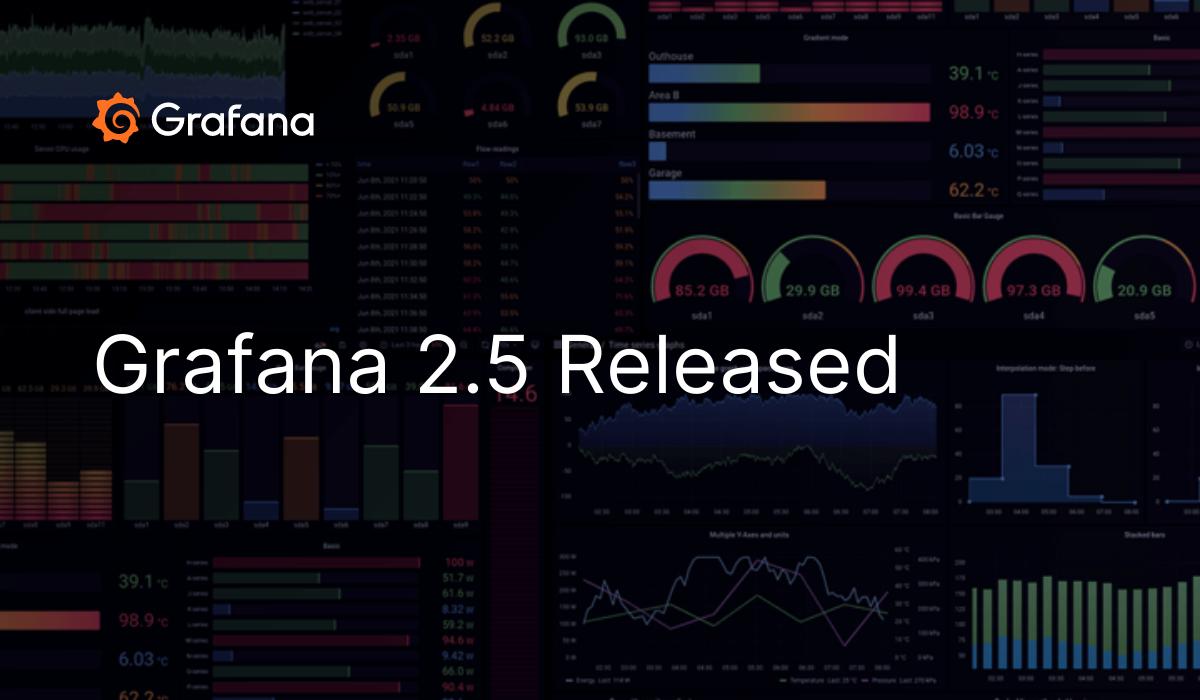 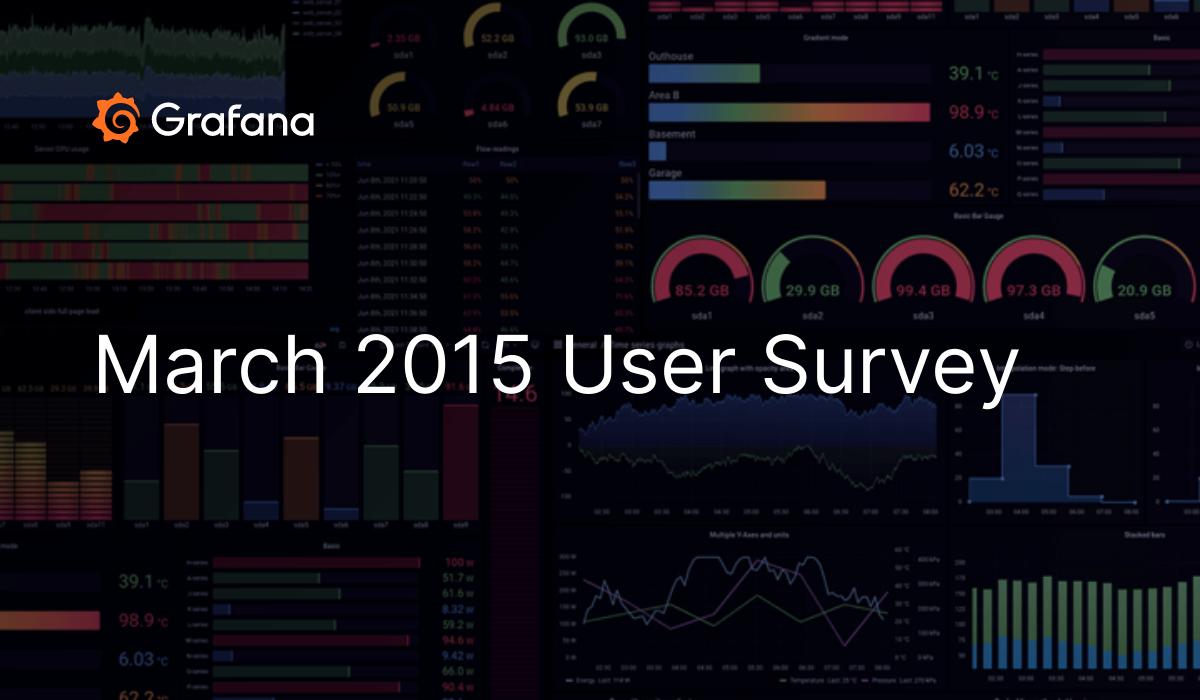